The size of a team can have a great impact on its effectiveness, productivity and happiness. There needs to be a balance between team member satisfaction, team productivity, and collaboration. Despite the availability of information and experience, there still seems to be a belief that throwing more people at a problem will solve it faster.

When deciding what the ideal team size is, there are a few factors to consider:

One famous study is by Hackman and Vidmar, which shows that individual satisfaction decreases as the team size grows. Having satisfied team members is important. Satisfaction is highest when there are only two in the team, but in the workplace this is quite often not practical, since quite often one of the team will be sick, on leave or absent for other reasons. Also, two people might not be able to handle the required workload, so you might need more people in the team to handle it – but there is a limit to how many people you can add before individual contributions drop. That brings us to the The Ringelmann Effect.

As the team size increases there are a few things that can happen. The Ringelmann Effect shows that individual performance decreases as more team members are added – additional studies have found similar results. There are a few possible reasons for this – social loafing (people contribute less as the number of team members increases), coordination complexity, individual motivation, and team cohesiveness.

Communication complexity increases as you add more team members. You may have come across the image below previously (source: Lighthouse). In this picture the points are people, and the lines are possible communication paths between the other people in the team. 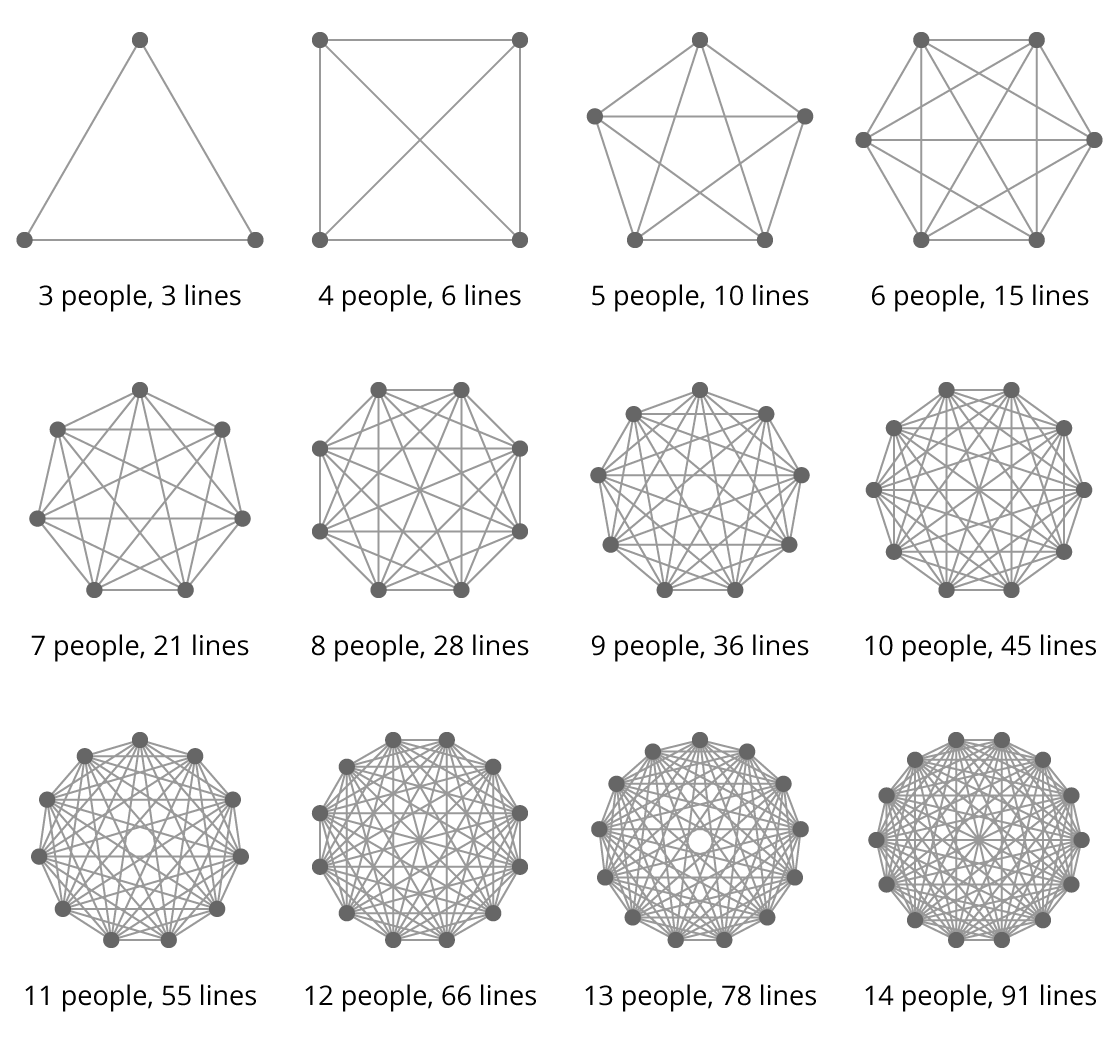 If you consider one example – the morning huddle or daily scrum. I personally witnessed meetings where just giving each person a minute to speak means that this ‘quick’ meeting consumes the best part of an hour! Where team members need to collaborate on a piece of work, or need to communicate important information, it becomes time consuming and complex to do so.

Within larger teams there is inevitably multiples streams of work, resulting in a team with multiple, potentially competing, goals. Experienced team members are often split between these streams as the sub-teams request help. Cliques can also form, disrupting the social cohesion of the team.

Brook’s Law says that  adding new team members to a late software project will make it even later. It sounds counterintuitive doesn’t it? I can tell you from personal experience that many people think still so.

Why does adding more team members to a software project not speed it up?

What do some other people have to say?

Jeff Bezos has his 2 Pizza Rule – if you can’t feed the entire team with 2 pizzas then the team is too big (or you’ve ordered the wrong size pizza!). This is a rule of thumb that makes sense – if each pizza can have eight slices and each person needs two slices, then the maximum you should have is 8.

Jeff Sutherland puts the absolute limit at 7. If there are any more in the team, then the team should be split. His article is here.

And from personal experience, I can say that 5-6 has worked best for the teams I’ve worked with. Four seems to be a good number, but there is very little buffer for when things are going well (such as long-term illness from one of the team members or when a new person needs to be onboarded), and 5 to 6 allows that little buffer, accounts for turnover well, and still provides for a high level of cohesion and collaboration in the team. When you start to add more people lots of things take a lot longer.

Photo by You X Ventures on Unsplash

5 Tips For Your Remote Team

How to Build a Team From the Ground Up

How to Improve Remote Team Collaboration

You can find out more about which cookies we are using or switch them off in settings.

This website uses cookies so that we can provide you with the best user experience possible. Cookie information is stored in your browser and performs functions such as recognising you when you return to our website and helping our team to understand which sections of the website you find most interesting and useful.

Strictly Necessary Cookie should be enabled at all times so that we can save your preferences for cookie settings.

If you disable this cookie, we will not be able to save your preferences. This means that every time you visit this website you will need to enable or disable cookies again.